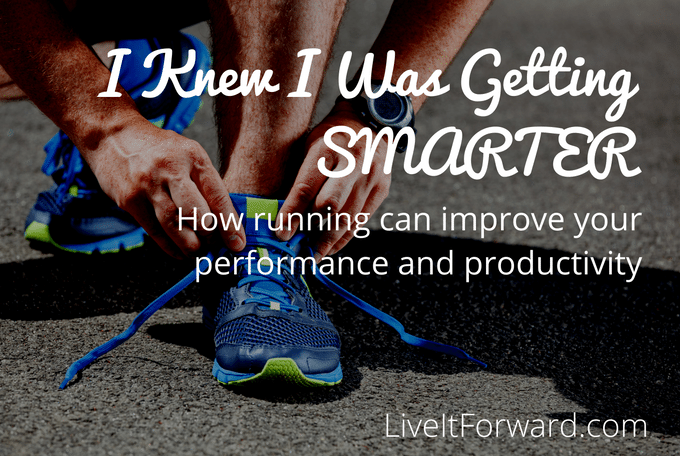 My two favorite magazines are Success and Runner’s World. By nature, I’m a positive and energetic guy, but on the days these magazines arrive in my mailbox, there’s an extra spring in my step!

Recently, I read an article in Runner’s World about how running actually makes a person smarter. And, as you probably know, a smarter brain leads to improvement in performance and productivity. Here are a few excerpts from this article by Denise Schipani, as well as a link to the full article.

How Running Makes You Smarter

Running helps more than your heart and lungs. Promising brain research shows a strong link between running and a “younger,” more nimble brain. Vigorous cardiovascular activity pumps more oxygen and glucose-rich blood to your noggin. And when you make running a frequent habit, the rewards are long-term. All forms of exercise generate more energy for the brain, but research indicates the more aerobically challenging the exercise, the greater the mental payoff. Here’s a look at your brain on running.

NEW THINKING: Running sparks the growth of fresh nerve cells, called neurogenesis, and new blood vessels, called angiogenesis, says J. Carson Smith, Ph.D., an assistant professor at the University of Maryland in College Park who studies the role exercise plays in brain function. “We know that neurogenesis and angiogenesis increase brain-tissue volume, which otherwise shrinks as we age,” he says. In a 2011 study reported in the Proceedings of the National Academy of Sciences (PNAS), for example, older adults who exercised regularly increased the volume of their hippocampus—the region linked to learning and memory—by two percent, compared to inactive peers. That may not sound like much until you realize that this part of the brain isn’t known for increasing at any point in adulthood. What’s more, running appears to “rescue” many brain cells that would otherwise die.

POSITIVE OUTLOOK: Running may be just as effective—and in some instances better—than SSRI drugs in treating depression. These antidepressant meds work by keeping neurotransmitters such as serotonin and norepineprhine in the synapses longer, improving mood and outlook. Turns out, aerobic exercise does the same thing. In studies, patients who were successfully treated with SSRIs relapsed sooner than those who stayed physically active.

Looking for hands-on tools to improve your performance and productivity? Check out The Live It Forward Show!

Better yet, don’t miss an episode!
Subscribe on iTunes, Stitcher, Android, or Google Play to get automatic updates.