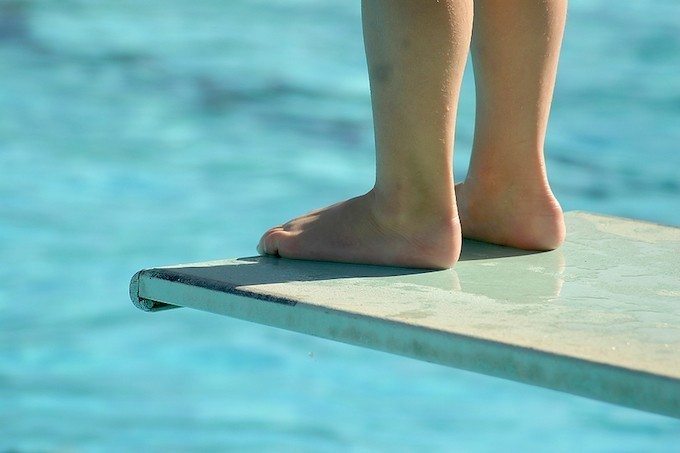 Have you ever seen a small child jump off the diving board for the first time?

As a swim coach for 13 years, I’ve helped hundreds of new swimmers take their first step off the diving board. And believe me, it never gets old. Here’s what happens…

Finally, the little one comes to her moment of choice: Step Forward or Step Back!

If you want to be a great leader, there are three choices you have to make that are similar to choosing to step forward or step back while standing at the end of the diving board for the first time.

Step Forward or Step Back

Before looking at the three choices that turn good leaders into great leaders, two insights about children jumping off the diving board need to be understood.

First, when children jump off the diving board for the first time, they don’t “jump” forward. They “step” forward. Jumping comes later. Initially, it’s a very small step forward.

Second, if a child decides to step forward, his or her swimming skills improve instantly. This is not an exaggeration. I’ve worked with many wannabe swimmers who learned nothing about swimming for months. Yet the moment they took that one little step forward, they took off as swimmers. They learned more about swimming in the following week than they did during the previous three months. Is this immediate improvement due to the fact that I’m such a great swim coach? Well… of course, but that’s besides the point. The point is that one little step forward catapults new swimmers towards success.

In the same way, stepping forward into the right choices can catapult you towards great leadership and success. You don’t have to jump forward at first (that comes later). Just step forward into these three choices and watch what happens.

Forward Choice #2: Own Your Response. Most people live according to a flawed equation. They embrace E=O. This is the belief that the events in your life determine the outcomes you experience. Great leaders, however, add an R to the equation and make it E+R=O. In other words, great leaders believe the events that occur in their lives plus their RESPONSE determines their outcomes. They choose to take 100 percent ownership for their responses because they know the only thing they have complete control over in this equation is their response. They also know that if they own their response, they can turn even their greatest adversities into their greatest advantages. (Read more about the Four Fence Post of 100 Percent Responsibility.)

Final Thought. Whether it’s a small child stepping off the diving board for the first time or you stepping into a new leadership opportunity for the first time, forward is the direction of success. Therefore, when new leadership opportunities reveal themselves to you, be doubly sure you are taking 100 percent ownership of your reputation, your response, and your resolve. If you do, you will live it forward into great leadership!